Underrated and Underappreciated Part III: The Mids and The Pipes

In order to compose scores for the mid-section you should know a thing or two about the pipes--it is a pipe band after all. Everything starts with the notes of the pipe scale.  Bagpipes play a simple scale of nine notes.  These notes form what music theorists call "mixolydian mode".  Anyone with a music theory background knows that "mixolydian mode" is a major scale with a flat 7th.  Even though there is no key signature in bagpipe music, both the "C" and "F" notes are sharp (a semi-tone higher in pitch than they appear in the written music).  The bagpipe scale looks like this:

Pipe tunes use select notes from this scale to form "keys" which define the overall tonality of each tune.  There are four main "keys" used in piping music: "A Major", "A Minor", "D Major" and "B Minor".  Let's begin with the most common of all pipe "keys":  A Major.  The first part of the well known march "Wings" is written in "A Major".  If a tune is "written in A" it uses certain notes of the pipe scale more often than others to give it that tonality. 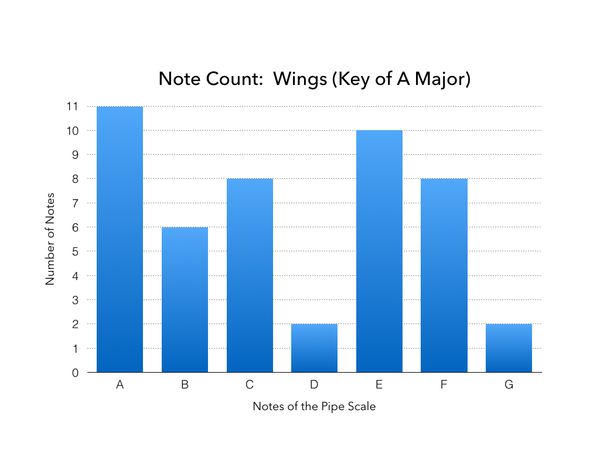 In any musical key, the two most important notes are the first and fifth note of the scale, known to musical theorists as the "tonic" and "dominant".  The tonic note in the key of A is "A" and the dominant note is "E".  Therefore, a tenor drummer's most logical note choices for this key are "A" and "E".

In the chart below, the note count reinforces the fact that "The Haughs of Cromdale" is written in "A Minor".  The tonic note "A" and the dominant note "E" make up over half of the total notes of the tune with "G's" and "D's" accounting for most of the rest.  Tenor drummers should choose the notes "A" and "E" for this key as well but, if you have the drums available, you may also want to add some "G's" and "D's" for more voicing options. 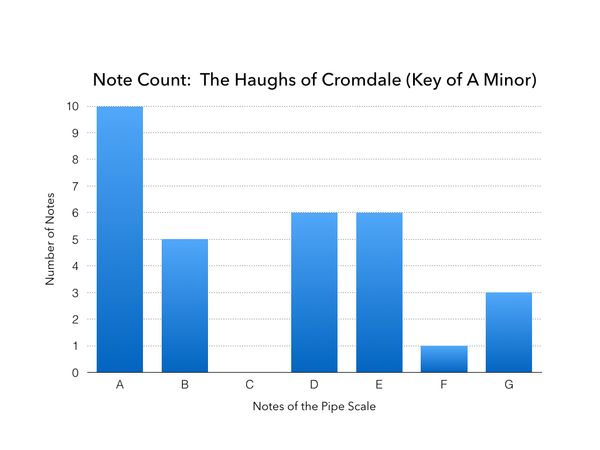 Join us again next week for an introduction to the keys of "D Major" and "B Minor".  Until then, happy drumming!