Underrated and Underappreciated Part IV: The Mids and The Pipes Continued

Welcome to Part IV in our series discussing note choices for the mid-section.  Last week we covered the "keys" of A Major and A Minor and this week we'll learn about the other two common bagpipe "keys": D Major and B Minor.

The "key" of D Major is quite common and easily identifiable due to the fact that tunes "in D" usually start and finish on "D". The well known march "Teribus" is written in D Major.  Note the fact that it begins and ends on "D" (the first "A" is a pickup note and not the official beginning) and it contains a large number of D and A notes.

Another characteristic of D Major is the strong presence of the A Major chord (made up of "A", "C" and "E").  "A" is the dominant in the key of D Major. Many D Major tunes switch back and forth between the D Major and A Major tonalities.  As shown in the chart below, in the key of D there will usually be a large number of "D", "F" and "A" notes (those that outline the D Major chord). You will also find a high number of notes that outline the A Major (dominant) chord:"A", "C" and "E".  Therefore, the best tenor note choices for the "key of D" are "D", "F", "A" "C" and "E". 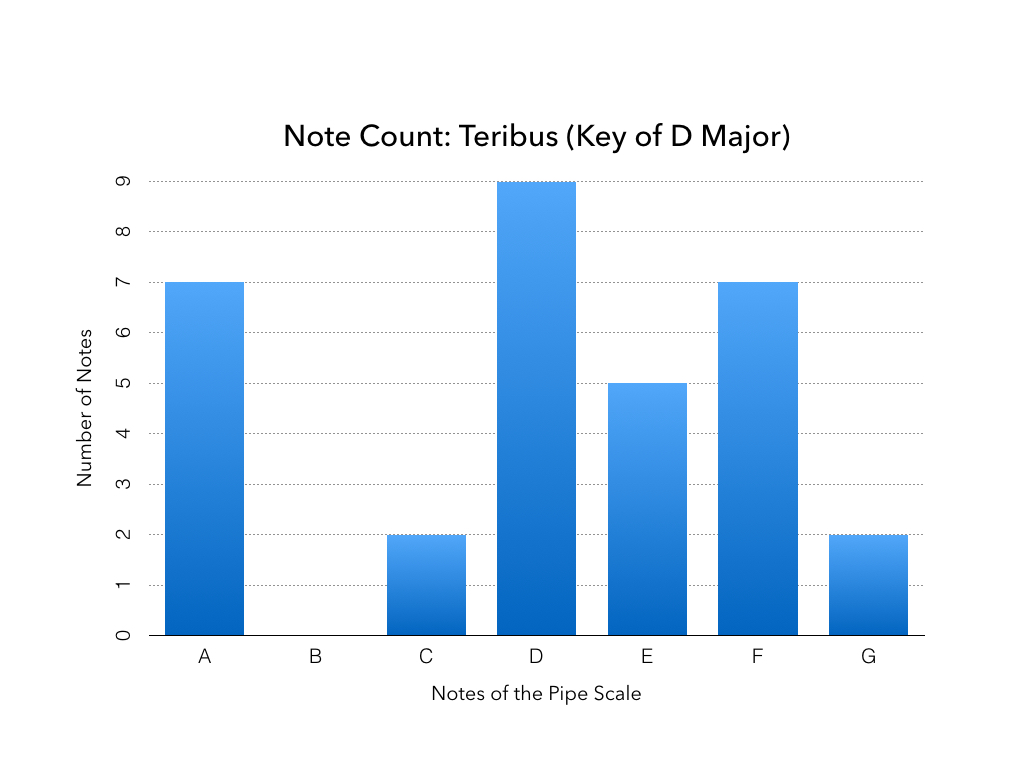 The final common bagpipe "key" is that of B Minor.  A tune written in B Minor will almost always start or finish on the "B note" and the tune will contain a large number of Bs.  The dominant note of B Minor is "F" so if you notice a large number of Bs and Fs in a tune you can be sure it's in B Minor.  In the classic jig, "Paddy's Leather Breeches", it is clear from the start that the key is B Minor as it begins with three straight B notes (a dead giveaway).  Many B Minor tunes contain passages with a strong A Major tonality.  The switch back and forth between the tonalities of B and A is also a sure sign the "key" of the tune is B Minor.

Judging by the number of B notes in the chart below, it is clear that "Paddy's Leather Breeches" is "in B Minor".  The dominant note in the "key" of B Minor is "F" and the presence of many F notes provides even more evidence of B Minor.  Also notice the large number of "A" and "E" notes that often occur in B Minor tunes as the tonality switches back and forth between B Minor and A Major. Because of this tonality switch, the best notes to choose for the "key" of B Minor are "B", "D", "F", "A" and "E". 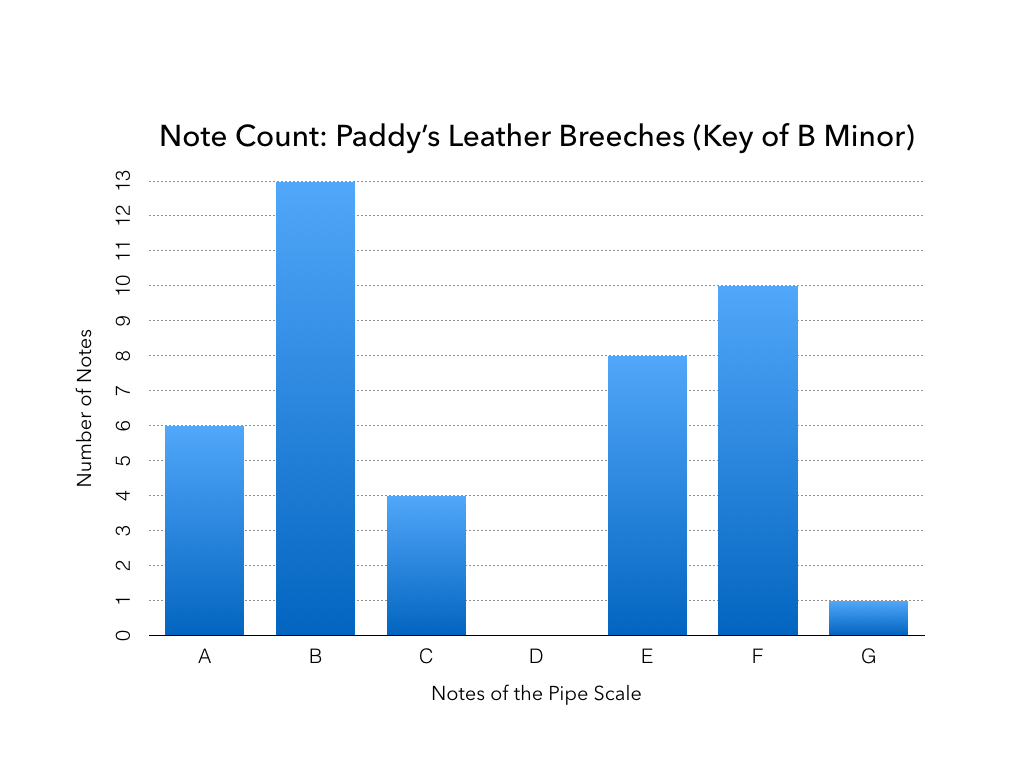 Now that you know a little bit about bagpipe "keys" and how to figure out the tonality of tunes on your own you have to think about which notes to choose for your tenor section.  To do this effectively you need to know the "key" of everything your band plays.  In my own band, our current medley is constructed with the following tonalities:

For the upcoming season our band has five tenor drummers and therefore five pitches with which to accompany the pipe tunes. Before writing the tenor scores I had to decide which pitches from the pipe scale to use based on the tonality of the tunes in the medley. You probably notice in the above chart that not all the drums play in every tune. Some notes just don't fit with certain pipe keys. For example, in our hornpipe I chose to only use three pitches even though I have access to five.  When scoring for the hornpipe only the pitches A, E and G truly complimented the melody.

This year, as we added a new tenor drummer to the corps, I was able to add the pitch "F" which is quite useful in the key of D (it's the third in a D Major chord) but doesn't work particularly well in other keys.  In truth, the most practical notes to choose to accompany most pipe music are A, E and G. Due to the modal nature of most pipe music, these notes will support the melody most often. If you have four tenor drummers it is helpful to have a "D" as well but with five or more drums it is up to whomever is writing the scores which notes to add.  A really lucky band owns nine tenor drums that can cover every note in the scale if needed. This is extremely rare, however, and is only seen in very large bands.

Hopefully this series on note choices for tenor drums has given you some insight into the process.  As always, don't hesitate to get in touch with any questions/comments. Enjoy choosing notes for your tenor drums!